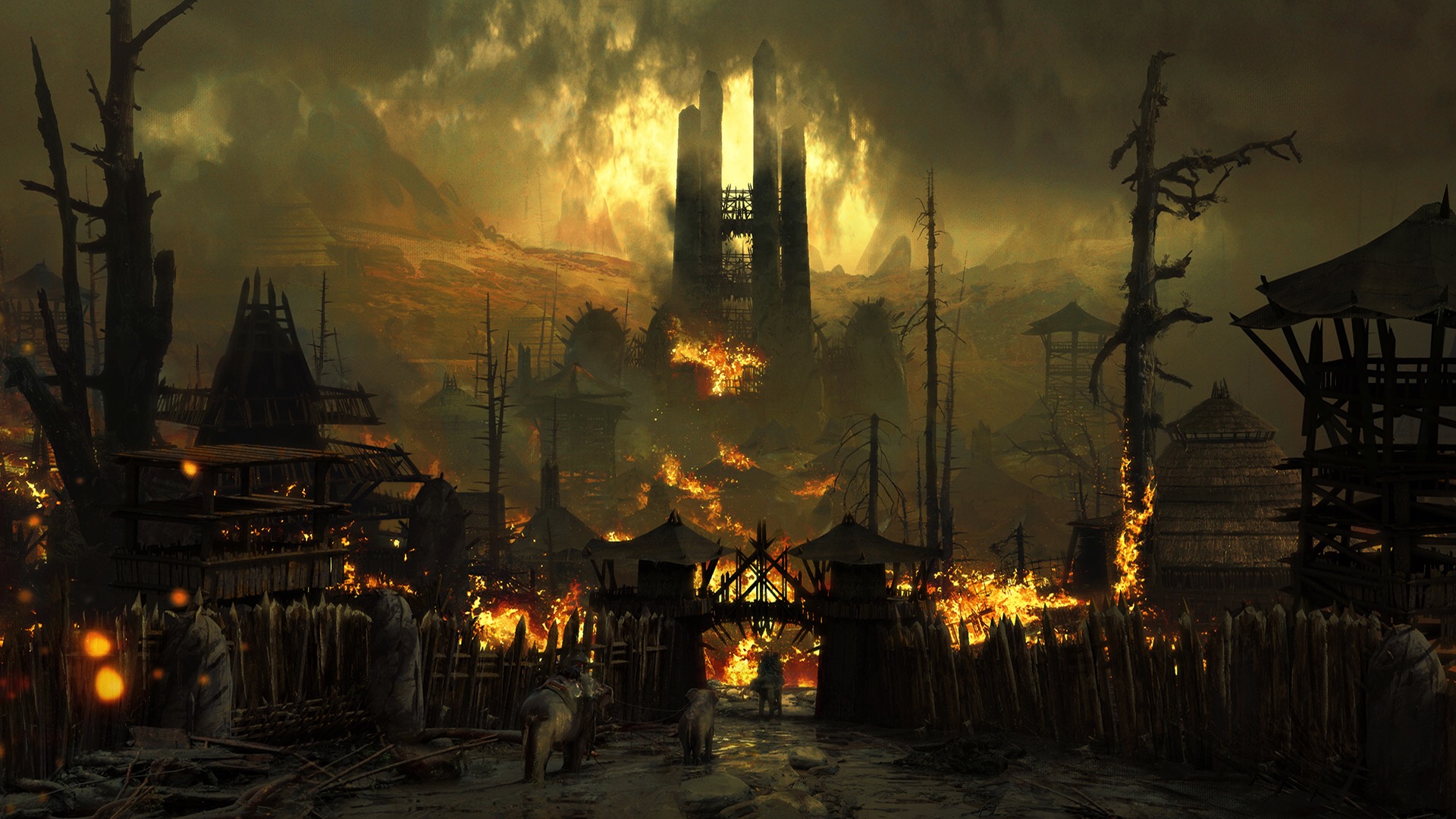 Designed by Sebastian Luca and modeled by Michal Kozlowski, Savage will bring your wildest imaginations to life! Leave behind your 21st-century inhibitions and build barbaric realms with this kit's primitive encampments, crude fortresses and inhumane structures! For the next week only, you can grab these thatched-roof dwellings, mud-pile foundations, stone pillars, pike-ridden strongholds and much more from the Savage Kit at 50% off! 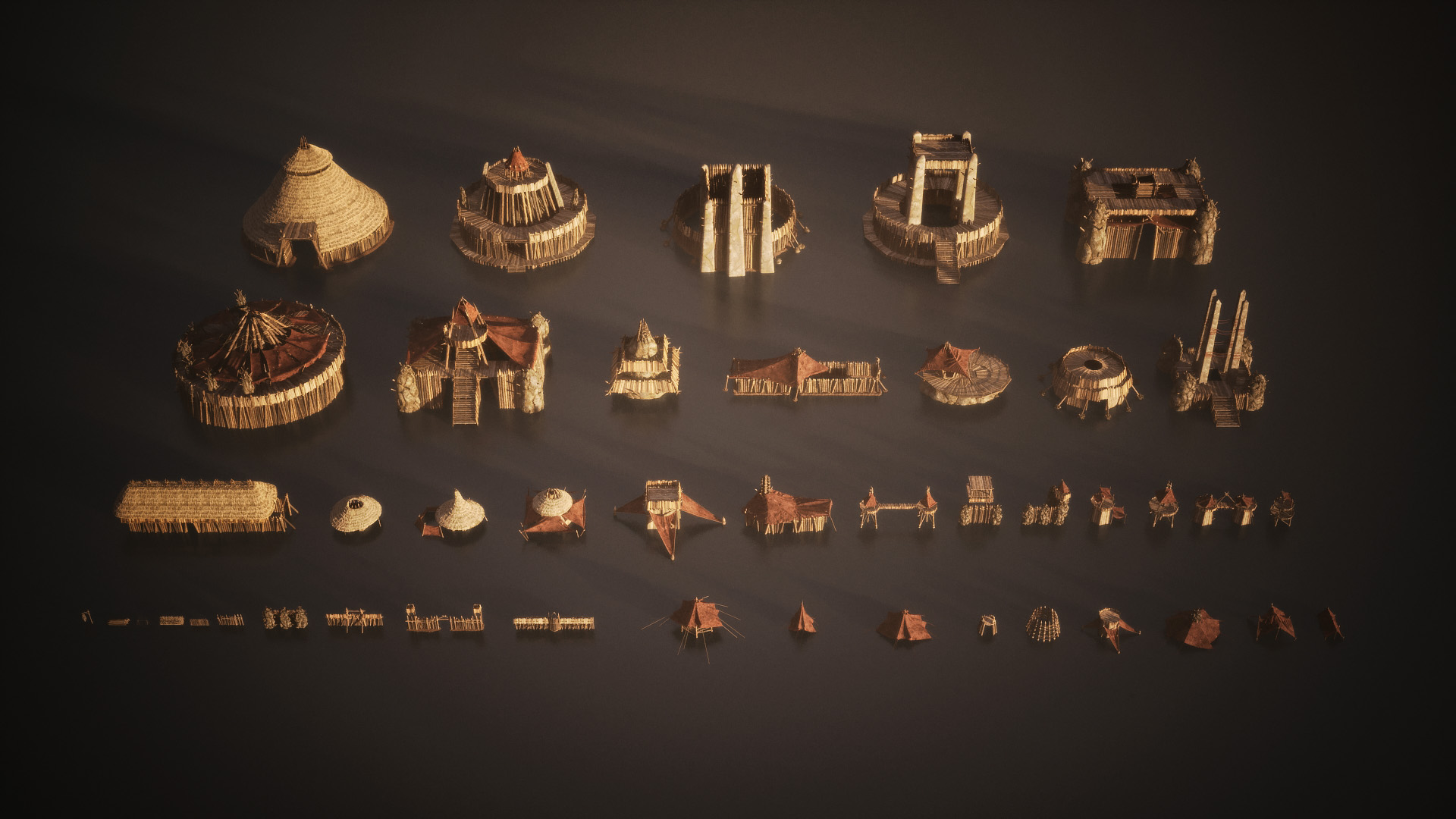 An interview with Savage Cover Artist: 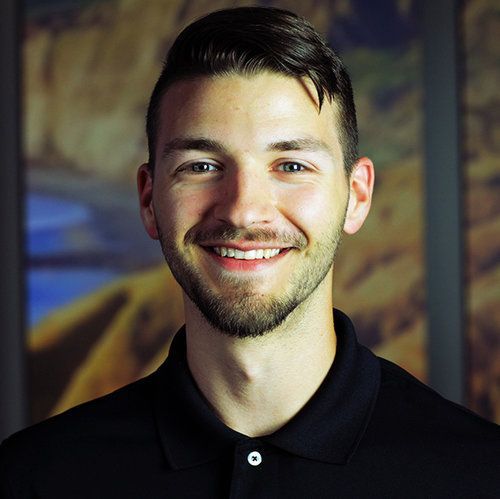 Ryan is a Senior Concept Artist at Intrepid Studios and his experience lies in video games, film, television, and book cover illustration. He is currently working on Ashes of Creation, a unique MMO game from Intrepid Studios, and a super duper top secret unannounced film project that he cannot talk about. His favorite past projects include The Orville and Ashes of Creation: Apocalypse.

What story is the cover art telling?

Built in the aftermath of a volcanic eruption, they knew the risk they were taking. Now, these scavengers face losing what was never theirs to take. I wanted to tell the story of an environment as savage as the group of people inhabiting it.

What inspired that story? How do you usually cultivate inspiration?

In everything I do, I try to consider the history and find deeper meaning beyond just a cool image. This was no different. Here, I was inspired by the kit. I looked at the forms, the materials, the way they were built. Who would construct like this? Why? What’s their environment like? It’s fun to piece everything together from elements that might normally go unnoticed. This was very much a case of the function following the form. I already had the form in the models themselves, so all I had to do was reverse engineer the function as I saw it.

What was your process creating this striking image? What Software did you use?

Research and sketching always comes first. After I found the story, compiled good reference for the mood I was going for, and had a strong compositional sketch to work from, I jumped into Modo to begin playing around with the kit. Using the pieces as they were, as well as adjusting them to find new structures, I experimented with placement, density, lighting, camera angle, etc. I wanted the overall space to feel claustrophobic and primal, complimenting the structures themselves. Once I was happy in 3D, I rendered out a few passes and took those over to Photoshop. From there, it was a mixture of paint, texturing, and post processing to bring it all together.

How was your experience working with this kit?

I had such a great time with it. The versatility and malleability of the pieces offered a wide range of possibilities. I could’ve taken this image in so many different directions—I even played around with a more vibrant snow scene at one point. Once I really got into it and found the voice of this civilization though, I fought the urge to lose myself in the complexity of the scene, building and bashing to my heart’s content—it was just that fun. And I wouldn’t consider myself a great 3D artist by any means either, so I can’t wait to see what others will be able to do with this kit.

Why do you make art and what is your next goal?

Honestly (cliché incoming), I just can’t see myself doing anything else. What nature and humankind have created is absolutely insane, so whether it’s trying to find some way to capture the essence of that or come up with something unique and fresh, there’s always more to see, learn, and imagine. It’s a fun challenge that I never get tired of. Being a massive fan of and inspired by strong storytelling in movies, especially through the visuals, I want to be a part of that and am hoping to find more opportunities to concept for film.

Savage is 50% off until April 30th, so don't miss your chance to grab all the barbaric pikes, cruel cages, and brutal fortresses for all your wildest fantasies!